skip to main | skip to sidebar

Why's and How's of Drop Trapping

16:30 | Posted by phreephallin | Edit Post
When I first started learning about TNR, I came across this video of entitled "A Drop trap catches more cats!" I watched the video and was impressed with what I saw. I did a little more research and built my own drop trap. After using it to catch well over a 100 cats, I'd like to share what I know so that more people can use this versatile and effective trapping tool. With a good design and construction, proper tactics and patience and you will easily catch the most trap shy cats.

1. Able to trap cats which are trap shy from being previously trapped.

2. Able to catch multiple cats at one time.

3. Able to select individuals out of a crowd.

4. Able to "stand-off", or watch and activate trap from a distance.

THE CONS: My trap is bulky, heavy and difficult to transport. Finding a good spot to place it is often difficult and managing the string can be a pain. Impractical to use in some locations.

THE TRAP:  The trap I built is 3'X3' and 1.5' tall.  I used 1"X2" lumber which I screwed and glued together to form a box and the frame for the transfer door. The transfer door was fashioned out of a piece of  plywood. A crude flap is attached to the back of the trap with hinges. To reduce the weight at the front of the trap, I placed the door in the rear corner. I lined the bottom with weather stripping to dampen the noise of the trap falling. I then attached garden netting using zip ties and rope. 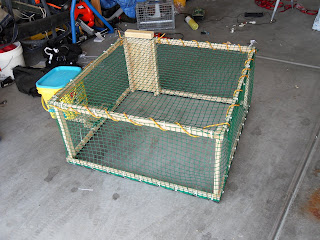 THE WEIGHT and COVER: The weight, a kitty litter bucket filled with rocks, sits on the crude flap in the back of the prevents the cats from being able to move the trap.  The cover, a fitted queen size sheet , calms them down when placed over the trap.  I bundle it up and keep it with the weight at all times. As soon as the trap is sprung, the cover is immediately available to quiet the cats. 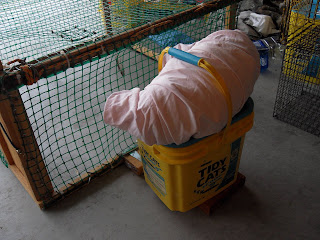 THE PROP STICK and STRING: The prop stick is approximately 12" long.  Something like a paint stirring stick would be good, but I usually just used scrap from parts I have sometimes as large as 1"x2". I try to bevel the end that is going to be on the ground so that when the stick is leaning at an angle, the bevel is flat on the ground.  I also place a notch on top to hold the trap. With the notch and bevel the stick should be quite stable while holding the trap. Cats have rubbed up against the trap  numerous times and I have yet to have one knock it over. I drill a hole in the front part of bottom end and attach the string at this point. Pulling the stick from this point knocks it over quite easily. I also like to pad the stick with weather stripping or tape so that it doesn't make as much noise when the trap is sprung. 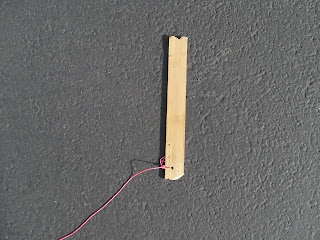 The string has to be lightweight without any stretch. Mason's string works very well. Make sure to wind it back up using the reel as opposed to wrapping the string around the reel which will cause it to twist up. 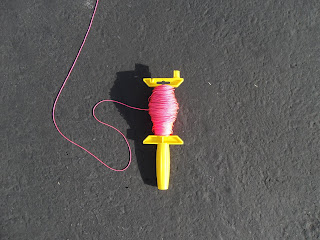 THE TACTICS:  I try to cause as little commotion as possible when setting the drop trap up. A slow quiet approach is best if you don't want to upset the cats too much. The trap should sit on a flat surface so that no gaps show underneath the trap. A tenacious cat may be able to wiggle underneath! Ideally, I place the trap so I can view it from the front left quarter (my transfer door is on the right side). This is the best view for me to see if the cat is in and not beside or behind the trap. Normally, I put the prop stick at the front left corner of the trap with notch holding the trap and the string hole closest to me. The bait goes in the very back center of the trap. At this location, any  cat that is eating the bait is completely inside of the trap. I usually bait the drop trap with a lot of food to hopefully draw multiples and because with a lot of food, cats will relax and sit down to eat, making them easier to trap. 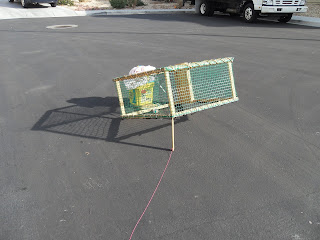 If I think a cat is especially wary, I might move the prop stick further back to hold the trap up higher. It is also not unusual for me to sit in my vehicle and at a distance of up to 300 feet. A pair of binoculars is absolutely necessary for determining if the cat is actually in the trap or not, especially when lighting conditions are poor.  At night, if I want to sit back at a distance, I usually select locations for the trap that are underneath a street lamp or other light source.

Another option is for the person pulling the string to hide out of site from the trap. A second person can watch from a better vantage point and signal when to spring the trap.  If you are going to use this system, practice your communication signals before you start trapping. Screwing up the signals is a sure fire way to  miss cats that you should have trapped! Another tactic is to setup the trap outside of a window or door, lead the string inside and then watch from inside the building in the dark.

Things other than food will cause a cat to enter the drop trap. One cat sat next to the trap for two hours until the frustrated caretaker went over and shooed her underneath the trap! Laser pointers, hanging feathers, toys and catnip have all been successfully used to get cats to enter drop traps.

SPRINGING THE TRAP: Always ensure that the string is running directly to your position without being snagged on anything. Also ensure that there is little slack in the string and that once the trap is set, you never leave the string or take your eyes away from the trapping area. Once you decide to spring the trap, make sure that you pull with as much force as you can. If I am standing, I will actually walk or run away from the trap while I pull to take up the slack even quicker. If I am inside of a vehicle, I make sure that the string is taut and that I am positioned so that I can generate enough power to spring the trap quickly. Cats are incredibly fast and strong and given even a split second of hesitation, they will find a way to slip out!

As soon as you have sprung the trap, be prepared to move in, cover the trap and transfer the cat out of the  drop trap. A fearful cat will batter itself against the inside of the drop trap seeking a way to escape if left uncovered. Covering the animal will quickly calm it down and keep it from injuring itself. Transfer cats out of the drop trap as quickly as possible because a) resetting the drop trap will allow you to trap another  and b) until the cat is in the transfer trap, it isn't truly "in the bag"! 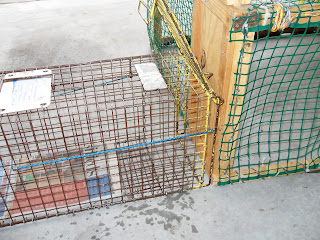 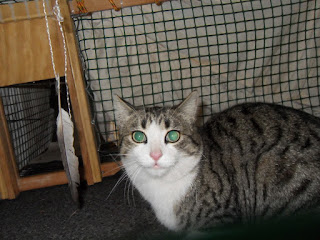 These are rules that I have come up with based on mistakes that I have made that have allowed cats to escape, or become injured unnecessarily. The injuries were scraped noses and faces which occurred when I was using a smaller, more lightweight design. Since the cats could easily lift the trap they would bang themselves up frantically! Just yesterday, I had to add #1 to the list as I had my first cat successfully wiggle out from underneath the drop trap!


1. Ensure that the drop trap sits flat enough to prevent cats from wiggling underneath.

2. Never leave the string once the trap is set.
3. Ensure that the string is running cleanly to your position without much slack.
4. Watch the trap and be prepared to pull the string at any time!
5. Double check that the cat is actually in the trap (wait till its eating!)
6. Pull with all of the speed and violence you can muster!
7. Transfer cats out of drop trap as quickly as possible.
8. Don't open the transfer door too far if it allows the cat a place to exit the drop trap other than into the transfer trap.

9. Make sure your materials and design are secure and minimize the chances of injury to the cats.

10. Inspect and repair the trap frequently to prevent cats from being able to exploit a flaw or weakness.

Thanks Laura. I got a lot of good info from your site!